Skip to content
Grammy’s Red Carpet Round Up
bringing you all the best in awards fashion
While us normal humans are watching the Grammy’s and all of it’s glamour from our televisions and snacking on too salty potato chips, the music world’s elite is all raging together and being praised for their incredible talent. The Grammy’s are probably one of my favorite award shows because I absolutely love music, and let’s be real, the performances are always awesome.
I won’t bore you with my review of performances and my opinions about every little thing that happened, because you most definitely do not care. I am here though to bring you the best of the 2015 Grammy’s fashion.
Award show season is the peak of red carpet fashion in the celeb world so this is a very important event, and some people killed it (while others didn’t).

She killed it tonight. Wow. I absolutely adore her lilac hair and her midi dress is perfection. Her look is fun and still really sexy, in true Katy Perry fashion, but it is also super sophisticated and classy. This is the kind of look I expect of people at the Grammy’s. She looks stunning and there isn’t a single thing I would change about this look. Well done girl.

2. Chrissy Teigan and John Legend
Not only is this couple everyone’s relationship goals, they are also now everyone’s outfit goals. These two look amazing. Chrissy’s dress is simple but sexy at the same time. The cut outs on the top and sides of the dress are intricate and modern and her accessories and makeup are kept simple as well. John looks dapper, as always in his grey suit. They compliment each other nicely and are pretty much the perfect pair.

All hail the queen. Queen B has done it again. Looking flawless as always, Bey kills it in a beautiful black gown. The deep v in the front keeps the look youthful and sexy as does the sheer quality of the fabric at the bottom of the gown. Beyonce always finds a way to look absolutely ethereal and she has outdone herself once again by looking like a total goddess. 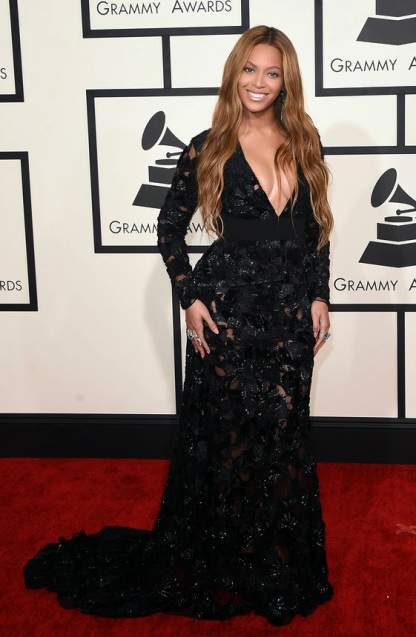 4. Taylor Swift
Taylor has been riding the fashion train so hard lately and she has time and again been getting herself on the best dressed list. At first I was unsure about this dress, only because I’m not a super huge fan of hi-low type deals. The longer I looked at her though, the more I fell in love with her look. The teal color compliments her skin tone beautifully and looks so great on her. The complimenting fuchsia shoes add a nice accent and keeps the look fun and flirty. Her simple accessories and makeup choices keep the focus on her dress and I don’t think I’ve ever loved a look more. 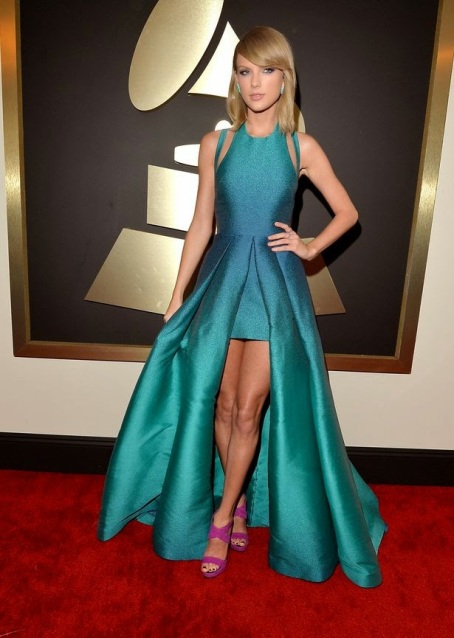 5. Kim Kardashian and Kanye West
Okay, let’s be real. You may hate on Kimye, but they are such a power couple it is unreal. Kim looks like a golden goddess, and her cleavage is on point. Her newer, shorter haircut is so fitting for her also. Kanye, the fashion guru he is, looks extremely handsome in his typical all-black get up. I really don’t know what else to say besides the fact that they are unstoppable and I’m obsessed.

6. Childish Gambino/Donald Glover
Wow, yeah this is bae. Besides the resting bitch face he seems to be pulling in this photo, let’s just all marvel at how good he looks. I’ve been a huge fan of his, in all realms of work he does, and he surprised me on all levels tonight. Typically, Gambino rocks a stoner-casual look, but he cleans up nice. I especially love his choice of footwear, even though slippers aren’t really supposed to be worn outside. He looks classy as all hell, and it’s probably because of the bow-tie.

7. Bastille
Collectively, this british alternative group looks pretty fantastic. They look cohesive, slightly amused, and very polished. I love that they aren’t too coordinated, although they still look nice when standing next to each other. They also individually have their own personality to their look which is refreshing and nice to see. (Sorry for the use of a getty image, oops.)

8. Jesse McCartney
Yeah, I was as surprised as you probably are to find out not only that he still exists but that he was even invited to the Grammy’s. Sorry Jesse, but you definitely peaked in like, 2006. He does look quite good though. I have a soft spot for velvet suits so this was a great, great choice. He looks very handsome and I’m glad to see he looks just as fresh faced and cute as I remember him to be.

9. Haim
Oh. My. God. Yes. Haim is everything. You do not understand, but this sister trio is perfection. They all look stunning and I could not be more in love with each of their looks. I am too excited that I can’t think of anything else to write about them so just take in their greatness. 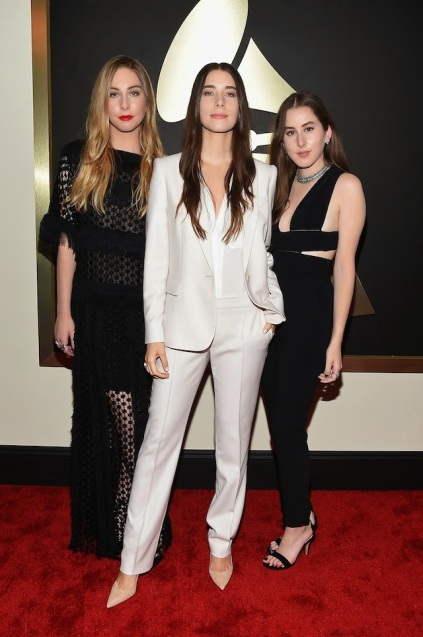 10. Anna Kendrick
To be quite honest, I’m not a huge fan of hers, but she totally killed it tonight. I love a good pantsuit, as you all know by now, and she makes this look feminine and sexy. I love the deep cut jacket and the simple pairing of black pointed toe pumps. The simplicity of the look is what makes it amazing, because it is easy to overwhelm a powerful silhouette with extra accessories. Good job Anna.

Well, that’s my best dressed round-up for the 2015 Grammy awards. I could talk about all the bad, like Sia for example, but I don’t think I could even fathom that. I did however enjoy Lady Gaga’s look and Nicki Minaj, contrary to popular opinion. I hope that even if you didn’t watch the Grammy’s you could still take in most of it’s greatness through the amazing red carpet looks.
x A