With Halloween right around the corner (seriously, only 16 days), it’s time for the yearly costume scramble, that is, the time of year where everyone forgets the costume they decided on in February, and desperately tries to piece together anything that could be fitting for the occasion. I’ll be the first to admit, that’s been me every Halloween since my Mom stopped hand-making my costumes.

Surprisingly, this year I think I’ve got it figured out, and finally I’m getting my opportunity to transform myself into Cher Horowitz, everyone’s favorite ’90s teen queen. Honestly, it was a long time coming, but thanks to the resurgence of  ’90s and ’00s fashion, it’s becoming a reality.

However, if you’ve found yourself yet again Google searching “quick easy Halloween costume ideas,” I’ve come to rescue you. Thankfully 2018 delivered us a healthy dose of pop culture icons, and fashionable ones at that. Here are some of my favorite easy-to-recreate looks, inspired by 2018’s most badass (mostly female) characters.

Emily Nelson From A Simple Favor 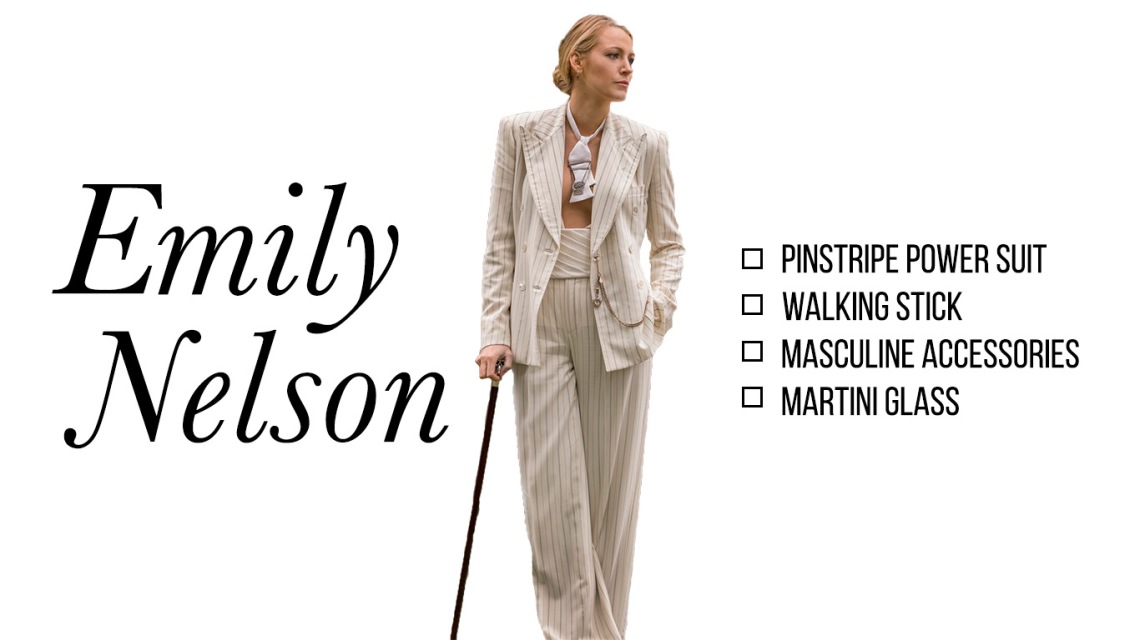 If there’s anything we know about Blake Lively, it’s that she has the ability to rock almost anything she puts on. Seriously, she could wear a paper bag to the Met Ball and make it look chic. In her recent role as Emily, the mysterious and blunt PR executive in A Simple Favor, Blake Lively, opposite Anna Kendrick, stole the screen, but mostly with her amazing wardrobe.

Emily’s career is in the fashion industry so it’s no wonder she’s a sartorial marvel, but what’s most amazing, is the masculine influence and the abundance of power suits in her closet. Throughout the film, Emily rocks various suits, which was actually an idea Blake Lively had, inspired by the film’s director. The suits used in the film were vintage, but there are plenty of options out there that can be used to recreate her look. My advice? Look for pinstripes and masculine accessories (like a walking cane).

Sharp Objects, the mini-series on HBO adapted from Gillian Flynn’s (author of Gone Girl) novel of the same name, shocked and captivated audiences all summer. Even with only eight episodes, all near an hour in length, Sharp Objects easily became a one of the hottest shows of the summer. The mixture of intense personal themes, a haunting true crime plot, and an odd cast of characters, made for the perfect dark drama.

Sadly, Camille Preaker, the series protagonist portrayed by Amy Adams, doesn’t offer a lot in the way of costumes. Most of her wardrobe consisted of long sleeve t-shirts and black denim. However, Camille’s younger half-sister Amma, gives us a lot to work with and the snarky teen, often seen floating through town on roller skates, may have been the real star of the show all along.

Fortunately, there are two iconic looks you could go for. If you want to go a little retro, try opting for Amma’s roller skating look. Or if you want to err on the creepy side, try recreating Amma’s “Woman in White”-esque look with a long white nightgown and flower crown.

While not really an on-screen lady, Michael Langdon, from the most recent season of FX’s captivating anthology series, American Horror Story (AHS), was actually the inspiration for this entire post. Portrayed by newcomer Cody Fern, Michael Langdon is the product of Tate Langdon and Vivien Harmon, the troubled teen ghost/demon and matriarch from AHS’s first season.

While Fern’s acting chops have helped make him one of the most interesting characters in the season thus far, with a little help from hair, makeup and wardrobe, he’s also become one of the most fashionable of the bunch. Taking a page from the Coven’s book, and given he’s literally the antichrist (not really a spoiler, but maybe a little bit of a spoiler), it’s no wonder that Michael Langdon has made dressing into a dark art.

Thankfully for us, recreating his look should be relatively easy, but remember that the devil is in the details. Langdon, thanks to genes passed down by Tate, has a head full of long, beautiful blonde hair, which can easily be recreated with a wig or with your own hair.

His second most iconic trait? Eyeshadow. This will be the key to tying the look into a beautiful, satanic bow. And if you really want to take it the extra hell-ish mile, douse your neck in (fake) blood and pop in a pair of black Sclera contact lenses.

Ally From A Star is Born

If you haven’t made it to the theater to see A Star is Born yet, stop reading and go see it immediately. While I may be biased, since I’ve been a fan of Lady Gaga since her breakout in 2008, her performance on-screen has shown us a completely different side of her. While many may have seen her act before, notably in American Horror Story: Hotel, her rawness on the big screen is enough to take your breath away.

While Ally, Lady Gaga’s character and the film’s protagonist, undergoes a fashion evolution of her own, her most iconic looks come in the beginning of the film. While she’s just been discovered by country rock star Jackson Mayne, her style is eclectically her own—and simple enough for us to recreate with pieces that are easy to find.

This post wouldn’t be complete without a shout out to the badass animated ladies. Recently, Netflix released the second season of their original animated series Big Mouth. The series, created by Nick Kroll and Andrew Goldberg, follows a group of middle school friends as they journey through puberty. While I could go on and on about how this show is actually a public service, and should probably be shown in sex-ed classes, I’ll just cut to the chase.

One of the show’s most quotable, and frankly relatable, characters is Missy, voiced by Jenny Slate. Missy is a little bit nerdy, a lot obsessed with Nathan Fillion, and has one of the more iconic looks of the group.

While details are the key to every costume, with Missy’s overalls and yellow t-shirt, it’s imperative to pay attention to the accessories to ensure you look like Missy and not like a minion. Grab a yellow headband and a pink backpack, and you’ll have rounded out the look nicely. For bonus points, maybe carry a Nathan Fillion poster?

Remember that any of these looks can be adapted to your liking. The beauty of Halloween costumes is that they’re open to interpretation. We’re allowed to be as creative, detailed or interpretive as we want. Regardless of what you end up wearing, here’s to hoping its equal parts spooky and fabulous.